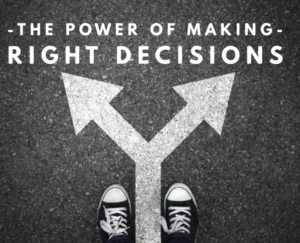 The Power of Making Right Decisions

Former president Ronald Reagan once had an aunt who took him to a cobbler for a pair of new shoes. The cobbler asked young Reagan, “Do you want square toes or round toes?” Unable to decide, Reagan didn’t answer, so the cobbler gave him a few days. Several days later the cobbler saw Reagan on the street and asked him again what kind of toes he wanted on his shoes. Reagan still couldn’t decide, so the shoemaker replied, “Well, come by in a couple of days. Your shoes will be ready.” When the future president did so, he found one square-toed and one round-toed shoe! “This will teach you to never let people make decisions for you,” the cobbler said to his indecisive customer. “I learned right then and there,” Reagan said later, “if you don’t make your own decisions, someone else will.”

Most people share a common curiosity about the future. People want to know:

•What’s going to happen in my life tomorrow, next week, & next year?

•Who am I going to marry?

•What is going to happen in my career?

•Am I going to be Successful?

•Is my marriage going to last?

People often view themselves as victims of fate. Waiting for a “good break” or “to get lucky” in the events of life. (cross your fingers philosophy)

It is God’s plan and His will that you have a great future!

“How you see your future is much more important than what has happened in the past.”- Zig Ziglar

God never intended us to operate on a hit or miss basis. Things do not happen because of fate.There are 5 Causes of incidents in our lives:

1. God influences, leads, and directs us

3. Other people make decisions and those actions affect me

4. Natural physical incidents in the world impact us

5. I make decisions & carry them out

Don’t go through life allowing things to happen, instead make thing things happen! Your Life now is a reflection of your past decisions.

1. Your Future is Determined by Your Decisions

Deuteronomy 30:19 NIV – This day I call the heavens and the earth as witnesses against you that I have set before you life and death, blessings and curses. Now choose life, so that you and your children may live

Choose – pick out or select (someone or something) as being the best or most appropriate of two or more alternatives.

What makes the difference in the quality of people’s lives?  Any study of history shows that the difference in human beings comes down to one thing: an ability to harness the power of decision, often in spite of adverse conditions. The history of our world is the result of decisions.

It’s the power of decision that caused:

•Rosa Parks to remain in her seat and state, “No, I will not go to the back of the bus.”  It would change the structure of society and the world.

•It took a forceful decision to compel an unarmed college student to stand in front of a tank at Tiananmen Square. (Show pic)

George Jones was a country music icon from the old school. A lot of his songs are the stereotypical country “cheat’n & drink’n” songs. And the fact that George Jones had a drinking problem was no secret. But on March 6, 1999 country music fans were horrified to hear that Jones was critically injured when he crashed his Lexus into a bridge in Nashville. The investigation showed that George had been drunk at the wheel. Thankfully he recovered, and two months later his new album called “Cold Hard Truth” came out and on it was a hit song titled “Choices”, and ironically the hook line says, “I’m Living And Dying With The Choices I Made”.

1. Tom Selleck turned down the Lead role of Indiana Jones

2. A thief stole 2 live lobsters and decided to stick them down his pants

3. Bank robber in Germany pulls out a gun & demands $. Teller said she needed his ID. So he gets it out, takes the cash and leaves the ID.

4. The girl who told Bill Gates, It’s the computer or me

5. Pausing for a moment, when your wife asks you, “Do I look fat in this?”

Luke 15:11-20 NIV –  Jesus continued: “There was a man who had two sons. 12 The younger one said to his father, ‘Father, give me my share of the estate.’ So he divided his property between them. 13 “Not long after that, the younger son got together all he had, set off for a distant country and there squandered his wealth in wild living. 14 After he had spent everything, there was a severe famine in that whole country, and he began to be in need. 15 So he went and hired himself out to a citizen of that country, who sent him to his fields to feed pigs. 16 He longed to fill his stomach with the pods that the pigs were eating, but no one gave him anything.17 “When he came to his senses, he said, ‘How many of my father’s hired servants have food to spare, and here I am starving to death! 18 I will set out and go back to my father and say to him: Father, I have sinned against heaven and against you. 19 I am no longer worthy to be called your son; make me like one of your hired servants.’ 20 So he got up and went to his father. “But while he was still a long way off, his father saw him and was filled with compassion for him; he ran to his son, threw his arms around him and kissed him.

This young man comes to his senses after a bad decision and starts thinking about what his life SHOULD be like instead of what his life IS LIKE. Making a right decision is the key! He decides to leave the pig pen!

•The floodgates can be open with ONE DECISION. Bringing us joy or sorrow, prosperity or poverty, companionship or solitude, long life or early death.

Our pig pens (Bad decisions) come in many forms but all have a common denominator: “A place where people end up, but never planned on going to.”

You make decisions and decisions will make you.” – Lester Sumrall

B. Decision is the ultimate power—and there are three core decisions each of us makes every moment we’re alive. These decisions have the capacity to empower, advance, frustrate or derail us, depending on what we choose:

2. We Decide the kind of Reputation we will have

Proverbs 22:1 NIV – A good name is more desirable than great riches; to be esteemed is better than silver or gold.

You should never say, “I don’t really care what people think of me,” When you have a good name, you have something of real value. (Hitler, Jezebel or Saddam hussein, Osama Bin Laden, john wilkes booth, Lee Harvey Oswald, etc…)

Life is for one generation. A good name is forever. Japanese proverb

Shakespeare, “Othello” – “Who steals my purse steals trash; ’tis something, nothing; ’Twas mine, ’tis his, and has been slave to thousands; But he that filches from me my good name robs me of that which not enriches him, and makes me poor indeed.”

Socrates said– “The way to gain a good reputation is to endeavor to be what you desire to appear.”

3. We Decide the people we associate with

Proverbs 13:20 NIV – Walk with the wise and become wise, for a companion of fools suffers harm.

•Never explore resources at the expense of relationships

Life moves at the speed of relationships

I Corinthians 15:33 NIV-  Do not be misled: “Bad company corrupts good character.”

Wrong relationships are thieves to your success – Relationships help define who we are and what we become.

4. We Decide whom we will serve

Joshua 24:15 NIV –  “But if serving the Lord seems undesirable to you, then choose for yourselves this day whom you will serve, whether the gods your ancestors served beyond the Euphrates, or the gods of the Amorites, in whose land you are living. But as for me and my household, we will serve the Lord.”

“God takes full responsibility for the life that is totally yielded to Him.”

Revelation 3:20 NIV “Here I am! I stand at the door and knock. If anyone hears my voice and opens the door, I will come in and eat with him, and he with me.”

Recognizing that you may be facing a difficult decision right now, or soon will be, I want to give you some “guidance guidelines” from Proverbs that will help you make wise choices.

Have I prayed about the decision? Am I seeking the Lord daily and allowing Him time to give me His direction? Most of the bad decisions I make are the result of not taking the necessary time to lay things out before the Lord. Here’s a principle: When possible, choose to pray and ponder for at least 24 hours before making a decision.

2. Look into the Word of God. What principles, commands, or prohibitions from the Bible apply to the decision you need to make? Has God given any promises or motivating verses on the subject? Most of the situations we’re faced with are already dealt with in the Word of God.

Proverbs 13:13: “He who scorns instruction will pay for it, but he who respects a command is rewarded.”

3. Seek Advice. The simple message of these Scriptures is: Get advice.

Don’t just go it alone, seek the counsel of others. If we want to make quality decisions, we have to be smart where we look for advice. You want someone with a track record of success in the area where you need advice. Here’s what you look for in a counsellor – wisdom, experience and impartiality

Proverbs 19:20: “Listen to advice and accept instruction, and in the end you will be wise.” When faced with a decision, find a faithful friend or two and ask for their input.

Prov 11:14 Where there is no counsel, the people fall; but in the multitude of counsellors there is safety

Let’s bring it down to everyday life.

*Is it right for me to lie?

*Is it right for me to cheat on my tax return?

*Is it right for me to commit adultery?

*Is it right for me to neglect my children?

My character defines who I am as a person. I’m not perfect, but if I want to make quality decisions throughout life, they have to be based on what is right.

Will my decision be good just for me? How will it affect others?

Will it only benefit me, and leave others out? Or worse, will it have a negative impact on others?

Phil 2:4 Let each of you look out not only for his own interests, but also for the interests of others.

When I look at taking a course of action, I have to ask myself the question: Is anyone else going to benefit from this, or is it just going to be me?

It’s not what we do ONCE in a while that counts, but our consistant actions and decisions we do.  What you do daily determines your future

“Success and failure are not overnight experiences. It’s the small decisions along the way that cause people to fail or succeed.” –Anthony Robbins

Is there anything you are not happy about in your life, career, health and money? Make a decision Right Now about how you are going to change it.

Don’t waste your life! Don’t settle for second best! Don’t go through life just existing, coping, or getting by!

The more Decisions you make, the better you become at making them. (Muscles get stronger with use)